Just too late to be included in my Western Sufism: a fine new book on Judaism, Sufism, and the Pietists of Medieval Egypt: A Study of Abraham Maimonides and His Times by Elisha Russ-Fishbane (New York: Oxford University Press, 2015). I couldn't believe that no-one had done a proper book on this amazing episode (discussed in chapter 3 of Western Sufism) and here it is--the proper book.

The book has six chapters, divided into three chapters. First come social foundations ("The Making of a Movement" and "Ideals and Institutions"), and then prayer ("The Devotional Life" and "Prayer Reforms"), including adoption and adaption of Sufi forms. The book ends with prophecy and messianism ("The Return of Prophecy" and "From Prophecy to Redemption"). The prophecy is, essentially, the consequence of union, making the completed man (al-insan al-kamil) into a [lesser] prophet, and messianism or redemption was, in some ways, the logical consequence.

Well-researched and well-written.
Posted by Mark Sedgwick No comments: 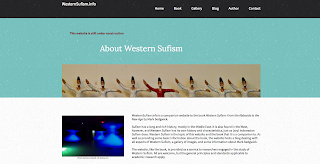 The companion website for the book Western Sufism is now live, at WesternSufism.info.

Some finishing touches are still needed, including completing the gallery.

There are links for pre-ordering Western Sufism.
Posted by Mark Sedgwick No comments:

What is "Western Sufism"?

Sufism has a long and rich history, mostly in the Middle East. It is also found in the West, however, and Western Sufism has its own history and characteristics, just as (say) Indonesian Sufism does. What is sometimes called "neo-Sufism" is part of Western Sufism. The term "neo-Sufism" is problematic, however, partly because it is also sometimes used to denote an eighteenth- and nineteenth-century Middle Eastern phenomenon, and also because the prefix "neo-" carries all sorts of implications, mostly negative, some inappropriate or even wrong, and only some appropriate.
Posted by Mark Sedgwick No comments:

Email ThisBlogThis!Share to TwitterShare to FacebookShare to Pinterest
Labels: terminology

I don't cover Israeli Sufism in Western Sufism as it starts after the "new age" period, but it is an interesting phenomenon, and one constituent group has just made The Washington Post. This is the group that practices whirling, led by Ora Balha. See here.
Posted by Mark Sedgwick No comments: