The Sanctuary of Sufism Reoriented 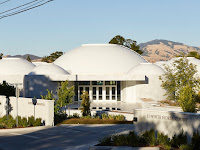 In Western Sufism, I left Sufism Reoriented, the American group descended from Inayat Khan that shifted to Meher Baba and left the Western Sufi milieu, running a preschool in California. A new article by Amos Barshad in Fader reports that it has also built a large “sanctuary” (pictured) in Saranap, California, designed to withstand Californian earthquakes and last 700 years until the expected return of Meher Baba. This project is said to have cost around $35 million, most of it donated by David Overton, a long-term member of Sufism Reoriented who grew rich from his worldwide chain of Cheesecake Factory restaurants. The Sanctuary sounds a bit like a survivalist project, with two thirds of its space under ground. Curious.

My thanks to C for drawing my attention to this article.
Posted by Mark Sedgwick No comments: