The New York Times has just published a long article on the New York Sufi scene, Adela Suliman, “Sufi Sect of Islam Draws ‘Spiritual Vagabonds’ in New York,” New York Times September 23, 2016. The article focuses on the Nur Ashki Jerrahis, but also mentions some other orders, though it gives little space to the larger ethnically-based orders. The article is interesting because it gives a somewhat higher profile to what has previously been fairly low-profile. It also avoids focusing excessively on the angle that is hinted at by the article's URL, which ends "new-york-converts.html."

The article is generally accurate, and only makes one serious error, in stating that Sufism "has been cloaked in secrecy for most of its existence, having been forced underground by Ottoman rulers in the 13th century" and in citing one New York Sufi without comment as saying that Sufism "has never been embraced by mainstream Islam.” Since Osman I did not die until 1326, there were in fact no Ottomans in the 13th century, and when the Ottoman empire did come into being, it generally promoted Sufism, as did the Mamlukes and others. Sufism has, mostly, been embraced by mainstream Islam, then, and has never been cloaked in secrecy, though certain aspects of Sufism have been handled with discretion.

My thanks to Ivan Timonin for drawing my attention to this article.

Posted by Mark Sedgwick No comments:

The Sufi albums of Franco Battiato 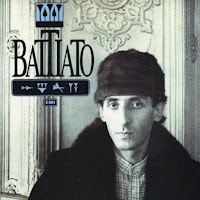 One of the best-known singers of the 1980s in Spain and Italy, Franco Battiato (born 1945, pictured here in 1986), was a Universal Sufi who wrote of his debt to George Gurdjieff, referred to René Guénon, and failed to make much impact on the American market with an album entitled "Echoes of Sufi Dances." This included the lines:


Yet the king of the world
Keeps our hearts enchained.
In the full white dresses
Echoes of Sufi dances
In Japan's undergrounds today
Oxygen machines;
The more all becomes useless
The more we believe it's true
And in the final days
English will not help.

From a Guénonian perspective, it is indeed true that English will not help in the final days--the days at the end of what Guénon on one occasion glossed as "the era of the white boar," a gloss that became the title of Battiato's most Guénonian track, "L'era del cinghiale bianco."

According to Manuel Ángel Vázquez Medel (“Ecos de danza sufí: la influencia de la cultura árabe: El islam y el sufismo en Franco Battiato,” in El mundo árabe como inspiración, ed. Fátima Roldán Castro; Seville: Universidad de Sevilla, 2012, pp. 153-77), Battiato read P. D. Ouspensky's In Search of the Miraculous: Fragments of an Unknown Teaching in 1975, and in 1978 started learning Arabic, in which language he later recorded some of his songs. He became famous in 1981 with "La voce del padrone" (His master's voice), the first Italian LP ever to sell more than one million copies, which included the track "Centro di gravità permanente"(Permanent center of gravity), which refers to the Gurdjieffian idea of centering the consciousness of self. As well as these albums, Battiato has also composed operas--Genesi (1987) featured whirling dervishes and Arab themes--and painted--again, often dervishes.

My thanks to Francesco Bentivegna for drawing my attention to Battiato's Guénonian connections.
Posted by Mark Sedgwick No comments: