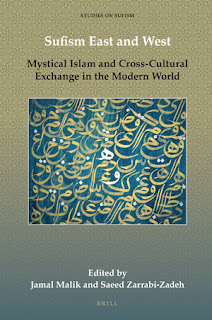 There are six chapters on Western Sufism in a new book, Sufism East and West: Mystical Islam and Cross-Cultural Exchange in the Modern World, edited by Jamal Malik and Saeed Zarrabi-Zadeh. The publisher is Brill, which means that the prices are bizarre: $153 or €127. But people are expected borrow Brill books from libraries, not to actually buy them.

In the first part of the book, two chapters deal with early and scholarly Western understandings of Sufism. One, by Carl W. Ernst, “The Dabistan and Orientalist Views of Sufism,” looks at the reception of the Dabistan, an influential text discussed in chapter 6 of my Western Sufism. The other, by Alexander Knysh, “Definitions of Sufism as a Meeting Place of Eastern and Western ‘Creative Imaginations,’” looks at more recent scholarly understandings.

Three chapters then deal with specific stands within Western Sufism. My own “Sufism and the Gurdjieff Movement: Multiple Itineraries of Interaction” argues that there is more than one answer to the question of how the Gurdjieff movement related to Sufism after the death of Gurdjieff. Marcia Hermansen, in “Beyond West Meets East: Space and Simultaneity in Post-Millennial Western Sufi Autobiographical Writings,” looks at four examples of the genre: Michael Sugich, Nuh Ha Mim Keller, Rabia Christine Brodbeck, and Maryam Kabeer Faye. And Marta Dominguez Diaz, in “Between Two or Three Worlds: Reversion to Islam, Beur Culture and Western Sufism in the Tariqa Budshishiyya,” looks at the Budshishiyya, and especially at European-born Budshishis of North African background.

More general questions are handled by Saeed Zarrabi-Zadeh in “Sufism in the Modern West: a Taxonomy of Typologies and the Category of ‘Dynamic Integrejectionism.’” “Integrejectionism” is understood as a hybrid of integration and rejection, as Zarrabi-Zadeh argues that different Western Sufi groups (which can be fitted in to various typologies) all both integrate and reject modernity, though in different ways.

In addition to these six chapters, there are four chapters that focus more on “Eastern” Sufism: Jamal Malik on Sayyid Ahmad Khan, Rachida Chih on the Tariqa Muhammadiyya, Catharina Raudvere on Bosnia, and Ali S. Asani on “Sufi Rock” in Pakistan. The first three topics are all important, and generally something is already known of them. I, for one, knew nothing about “Sufi Rock,” and therefore found Asani’s chapter absolutely fascinating.
Posted by Mark Sedgwick No comments: 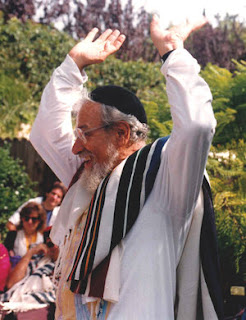 One of the more unusual Western Sufis of the 1970s was Rabbi Zalman Schachter-Shalomi (1924-2014, pictured), a Hassidic rabbi who became close to the successor of Sam Lewis (1896-1971), Moineddin Jablonski (1942-2001), and was initiated into the Sufi Order by Pir Vilayat Khan (1928-2004). "Reb Zalman" was more rabbi than Sufi, but he was a very universalist rabbi, and during the height of the New Age he taught much the same population in California as did the Western Sufis of the time.

Blann is not a professional historian, but rather a Western Sufi, a follower of Shaykh Nur/Lex Hixon (1941-95) and his Turkish shaykh, Muzaffer Ozak (1916-85). He became a Halveti shaykh, and wrote two very useful books on Muzaffer Ozak, Lifting the Boundaries: Muzaffer Efendi and the Transmission of Sufism to the West (2005) and The Garden of Mystic Love: Sufism and the Turkish Tradition (2005). Before following Hixon and Muzaffer, he followed Vilayat Khan, and his new book brings comparable light to bear on another stage of the history of Western Sufism that he observed.

A useful complement to Blann's When Oceans Merge is Reb Zalman's own autobiography, My Life in Jewish Renewal: A Memoir (Lanham, Maryland: Rowman & Littlefield, 2012).

My thanks to BH for drawing When Oceans Merge to my attention.
Posted by Mark Sedgwick No comments:

New light is shed on Inayat Khan’s year in Moscow (1913-14) by Oleg Yarosh, in “Universal Sufism and the Cultic Milieu in Russia at Turn of the xx Century,” Mondi 1, no. 1 (2019), pp. 101-20. Yarosh, who is head of Oriental Philosophy at the Ukrainian Academy of Sciences, uses not only Inayat Khan’s memoirs but also Russian sources that other researchers have not used.

Inayat Khan’s most important Russian host, it seems, was Vyacheslav Ivanov (1866-1949, pictured), a celebrated poet who had spent much of his life abroad and whose salon was one of the most fashionable in Moscow. He was a follower of Anna Mintslova (1865-1910), a Russian disciple of Rudolf Steiner (1861-1925), and was also interested in Sufism, which few Russians then were—Sufism was too closely associated with Russia’s Muslims, who were not highly regarded by the elite, says Yarosh. Notes on Sufism are to be found in Ivanov’s archive, and he wrote poems referring to Rumi and Hafez. One of his last poems, written in exile after the Russian Revolution, was “Певец у Суфитов” (Sufi Singer), which hails both Rumi and Hafez, who are linked to the “witness” of Plato.

Ivanov’s understanding of Sufism, then, seems to have something in common with the literary Western Sufism of Goethe and of the later nineteenth century, not especially with that of Inayat Khan. But even if Ivanov did not learn his Sufism from Inayat Khan, a pre-existing interest in Sufism may have been what led him to introduce Inayat Khan into Russian society, and it was evidently through him that Inayat Khan met other celebrities such as the composer and pianist Alexander Scriabin (1871-1915), a friend of Ivanov—celebrities who, one gathers from Yarosh, may not have been quite as taken by Inayat Khan as his memoirs suggest.

Before he met Ivanov, Inayat Khan’s point of arrival in Moscow was a fashionable night-club called “Maxim,” run by an unusual African-American entrepreneur, Frederick Bruce Thomas (1872-1928: see Vladimir Alexandrov, The Black Russian, 2013). A Russian Theosophist, Eugenia Spasskaya, noted in her memoirs that when other Theosophists heard of “a Hindu, Inayat Khan” in this “tavern hell,” they tried to “buy out the naïve teacher,” but that Inayat Khan preferred to stay at Maxim for a while.
Posted by Mark Sedgwick 1 comment:

My apologies for recent inactivity on this blog.
Posted by Mark Sedgwick No comments: