A Call has just been published for proposals for a conference on "Transnational Sufism in Contemporary Societies" to be held on San Giorgio Island, Venice, 9-11 November 2017, organised by Francesco Piraino (Scuola Normale Superiore) and Mark Sedgwick (the author of this blog). Download the Call, visit the website, and submit a proposal! Note that only a limited number of papers will be accepted.
Posted by Mark Sedgwick No comments:

Email ThisBlogThis!Share to TwitterShare to FacebookShare to Pinterest
Labels: Calls

A new book by Julianne Hazen, Sufism in America: The Alami Tariqa of Waterport, New York (London: Lexington, 2017) examines a little known American tariqa, the Alamiyya, which, as the title indicates, is based in Waterport, a small settlement on the southern shore of Lake Ontario, some 50 miles from the Niagara Falls. The Alamiyya is of Balkan origin (in the Khalwati-Hayati tariqa), was established in America in the late 1970s, and now has a following that is mostly American, about equally Caucasian and African American.

The book is based on a 2011 PhD dissertation defended at SOAS, and consists of five chapters, with an introduction and a conclusion. The first chapter places the tariqa in its American Sufi, Islamic, and religious contexts. The second chapter traces the tariqa from the Balkans to New York. The third chapter looks at why people join the tariqa. The fourth chapter looks at acculturation, arguing that while the tariqa has accommodated America in many ways, it still strives to follow the Sharia. The fifth chapter looks at the spiritual path that the murids follows.

For those who cannot wait for the book, the original PhD dissertation is available online.
Posted by Mark Sedgwick No comments:

Gurdjieff and The OA 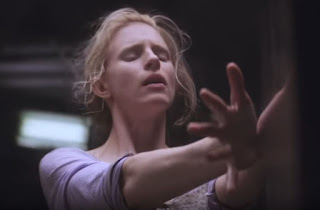 The OA is a much-discussed TV series, or perhaps a movie in eight chapters as Peter Debruge argues, made for Netflix by Brit Marling and Zal Batmanglij. With, it seems, some help from Gurdjieff.

One of the central plot elements is the Movements, learned and then taught by the central character, the OA herself (pictured). Asked about their source, the movie's choreographer, Ryan Heffington, refers to inspirations from "the 'skeletal shape' and attributes of various animals" to "face choreography... like ancient African jewelry on the face" (Hillary Busis in Vanity Fair). But they are not "just" dance. Even beyond the name, a similarity with the Gurdjieff Movements is definitely there. According to Marling, "by the time we were doing those movements for two or three months on end, something otherworldly starts to happen in your own body and starts to happen between people who are doing them" (Jean Bentley in The Hollywood Reporter).

Few people have noticed the Gurdjieff connection, but one exception is ColorMySoul88, writing on Reddit, who spotted the visual similarity between an isolated red house in the movie and a painting by Kasimir Malevich, and noted that Malevich was inspired by Gurdjieff (in fact, it seems it was Ouspensky more than Gurdjieff, according to art historian Mel Gooding). ColorMySoul88 also points out that the Movements resemble the Movements.

There may be even more to it than this. The central experience of the OA and her companions is an attempt to access another dimension through intentional suffering--though the intention is not theirs (it is involuntary suffering), and the phrase "intentional suffering" is not used.

The movements may be seen on YouTube, excerpted from the movie, or copied and performed by admirers such as Mohamed Massoud and Natalia Maldini.
Posted by Mark Sedgwick No comments:

Posted by Mark Sedgwick No comments:

Rumi in the New Yorker

Rumi is the topic of an article in The New Yorker by Rozina Ali, "The Erasure of Islam from the Poetry of Rumi" (January 5, 2017). The author interviews both Omid Safi, who correctly places today's interest in Rumi in the context of nineteenth-century interest in Oriental poetry, and Coleman Barks, today's most important translator of Rumi. A good piece.
Posted by Mark Sedgwick No comments: